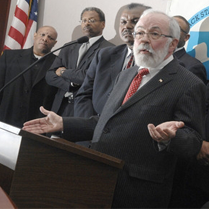 John R. Williams has dedicated his entire career to defending those who have been accused of crimes and whose civil rights have been violated by police misconduct.  Mr. Williams’s first major criminal defense case was as one of the defense attorneys in the murder prosecution of the leaders of the Black Panther Party.  After he helped procure their acquittal in the summer of 1971, he joined two other Black Panther Party lawyers and formed New Haven’s first public interest law firm, which continues today as John R. Williams and Associates, LLC.

Today, Mr. Williams is a pioneer for civil rights in Connecticut, primarily in situations of police misconduct.  He and his associates have argued many civil rights police misconduct and Section 1983 of the 1871 Civil Rights Act appeals cases in front of the U.S. Court of Appeals for the Second Circuit, and he lectures and writes extensively in this area.  One of his Section 1983 cases, Porter v. Nussle, even reached the United States Supreme Court.  Mr. Williams also focuses much of his practice on defending criminal defendants at both trial and appeal.

Additionally, Mr. Williams is proud of his involvement as an advocate for legislative change.  Throughout his career, he has made a priority of reshaping and democratizing the Connecticut jury system.  He was the first lawyer, in 1976, to challenge in Connecticut federal court the common practice of prosecutors arbitrarily removing minorities from juries in criminal cases.